Now you can make the Bible a part of your children’s lives at home in a very cozy way thanks to Holy Pals! These beautifully designed, high quality pajamas feature some of our favorite Bible stories so families can have fun with storytime before bed and use the pictures on the pajamas to explain passages like Noah’s Ark, David and Goliath or Jonah. Each pajama has the verse stitched on the sleeve to match the fun Biblical print. Look up the passage with your kids or even memorize the verse! Both you and your child will grow to know the Bible more and more with every wear. Risen sat down with founder George Costandi to learn more about this business he started with his wife and how their four-year-old son is even making some of the key decisions!

Risen Magazine: How did you come up with the idea of pajamas inspired by Bible stories?

George Costandi: It was actually my son that came up with the idea. My wife had bought these monster PJs for him and one day I was just getting him dressed and I was like, “Hey, don’t you love your monster PJs,” and he’s like, “I wish that I had David and Goliath pajamas.” He was obsessed with David and Goliath at a certain age. He just kept acting out the story and as you can probably imagine, I was Goliath a lot of the time. So anyways, he’s like, “I want David and Goliath on my pajamas,” and I was like, “Wow, okay. Well, sure. Let’s look into it.” And Jen and I always wanted to work together and do some sort of project so this just made perfect sense. Ever since we got married 10 years ago, literally on our honeymoon and we were like, “Hey, let’s do something together. Let’s come up with a nice idea.” And I would come up with something that she wouldn’t like and she’d shoot it down, and vice versa.

So, that happened for about seven years until Nazareth, our son, came up with this idea and it was the first time both of us were like, “Yes, this is it. This is absolutely it.” And so, that’s really how it all started. Literally, I was changing him to go to bed, we put him to sleep, and we went straight to the office and got started, and within 24 hours we had three designers and started our design process.

RM: I imagine there are so many people that are like you, where they say, “I’d love to start something of my own.” Did you have any design or business background? What did it look like, as far as actually turning this idea into a reality?

GC: This is entirely out of our wheelhouses. We’re not entrepreneurs. I come from a marketing background. I worked for an engineering firm. I run the sales and marketing operations. My wife works for Johnson & Johnson in a sales enterprise. So, we’re just a couple of sales folks.

Rewinding a couple of weeks prior to our start… Jen and I used to binge watch a lot of Netflix. Once we put Nazareth down, we’d just plop on the couch and watch few things, and then we’d be so exhausted, we’d go to sleep. And that happened for quite some time. And one night, when we got into bed, Jen said, “I feel really guilty about us wasting all this time.” And I just felt this sense of conviction where it was like, “You’re absolutely right.” I immediately picked up my phone and canceled Netflix on the spot.

And she was actually kind of shocked, literally, like, “Maybe I spoke too quickly,” and I said, “No, I absolutely agree with you.” We both just felt this very decisive, very clear directive, which we believe is the Holy Spirit, telling us, “You need to be using your time more wisely.” And so, for a couple of weeks after that, we would put Nazareth down, sit on the couch, and just talk for hours and it really was very cleansing and renewing for our marriage. And then, a couple weeks later, that’s when Nazareth said he wanted the David and Goliath jammies.

So it was as if God prepared us. He gave us the opportunity where we were actually looking for, how can we fill our time in the evening? And so, that is what prepared us. It wasn’t our qualifications. It was just being ready and allowing God’s voice to speak, and that’s really what brought us to the point where we were like, “Yes, we are equipped. We have the time and we’ll learn about it and learn about the industry,” an entirely different industry than our day jobs. But again, we felt the spirit working and it was just one door after another that kept opening, and here we are today.

RM: So powerful because how many times in the Bible do we see the people God uses aren’t necessarily fully equipped, they are just available. From David and Goliath to Jonah, Noah’s Arc and the Nativity, how do you select your prints?

GC: Honestly, they are at Nazareth’s request. He literally tells us what’s next. Nazareth is four and he is a very big part of this project. He is our target audience, him and his parents, being us, so we’re very fortunate to be the target audience ourselves.  We have that insight where we understand the dynamics and challenges of teaching scripture and what children are receptive to, what details are they receptive to? Also, we’re in the market as parents buying pajamas and discerning one design versus another. So, it’s just a very natural decision-making process, ultimately, in determining the designs. I would say we do get a lot of requests that come in from Instagram and Facebook, people asking us, but they very much so far have just verified what Nazareth’s been telling us.

So we started off with David and Goliath. We did Noah after that, then we did Jonah, then Nazareth was on this Adam and Eve, creation story focus for a little bit. So, that was our next project. And then, Christmas just came naturally as people are looking for Christmas pajamas and there’s nothing out there that’s on the nativity. That’s the whole point of Christmas and people are looking for Christmas pajamas. So, it really just made perfect sense.

RM: How do you come up with the designs?

GC: We source designers from all around the world, in the States, Canada, South Africa, Brazil, Columbia, New Zealand. We’re working with people all over the world.

GC: For me, looking at a design and saying, “Oh, this was designed in South Africa,” or “This was designed in France,” or whatever, is just kind of a nice touch, for me at least, but we’re very much focused on sourcing designers based on their style. We’re trying to create kind of diverse styles.

RM: And each set of pajamas has a verse embroidered on the sleeve that goes along with the portion of the biblical story that it’s telling. How do you hope that’s used for families?

GC: That was Jen’s idea, a mother’s touch. She knows the light delicate details in this project that really take it up a notch. And at the end of the day, our goal is to create practical, efficient, and adorable teaching tools that parents can use to teach their children, and so that was just a quick little touch that people, once a kid is a sitting on the couch hanging out with them, they have the passage right there on their sleeve. It gives parents opportunities to say, “Hey, why don’t we crack open the Bible and look it up and read the story together.” Also, people just love that. They love that there’s scripture on something that their children are engaged with throughout the day, especially through the pandemic, kids walking around the house in their PJs all the time being wrapped in the word of God.

I mean that’s our slogan, “Wrapping children in the word of God,” and I find comfort in that. Nazareth had a really good point. Why would I wrap my kid in monsters? They’re cute and all, but I much rather have him wrapped in the resurrection – we’re doing 2022 Easter pajamas right now. I want him to be wrapped in the celebrations of Palm Sunday and other very important parts of our life and our identity as Christians. I want him to engage with those and really have a very deep connection with Christ. That is our objective as parents.

RM: Another aspect to your company is you donate pajamas to benefit the Littlest Lamb Orphanage in Egypt. Will you share a little bit about that, too?

GC: Actually at this point, all of our funds are going to The Littlest Lambs. That is the currently our main focus: to shine a spotlight on organizations that are children-centric or child-focused, and organizations that are really in a deep need. The Littlest Lambs was close to home for us. It is an orphanage in Egypt, and Jen and I are Egyptians and we’ve heard about the incredible work they’re doing out there. In Egypt, orphanages are privately funded. There is no government funding to such organizations. And so, actually a couple from New Jersey, they were out in Egypt and saw a huge need for an orphanage and one that is on the same standard as an American orphanage.

They said, “We’re going to do something about it,” and they built a beautiful facility focused specifically for at-risk children who’ve lost their parents to death, imprisonment, or abandonment. And they provide these children with an environment to thrive. Their facility has as a bunch of apartments, and each apartment has multiple bedrooms, for the kids and a “mama” as they call their assigned caregiver. And their focus is to create a family environment for these children. It’s to give these children a family that they deserve, and that’s the culture that they’re trying to focus on, and it is the cornerstone of our business. The family is so important.

RM: And then when the kids that are part of Littlest Lamb get their pajamas they will feel special because not only have they gotten a brand new pair of pajamas, but then they’ll want to be curious about the story that’s on them, and it’s an organic way to teach about the Bible.

GC: To evangelize, yes, absolutely. These children have been given a different path and different challenges, but we still want to do our best to serve them as they deserve. This is the way that we’ve gone about it, and we hope that with the increased volume that are able to sell, that we’ll have capacity to offer the same support to other child-focused charities. 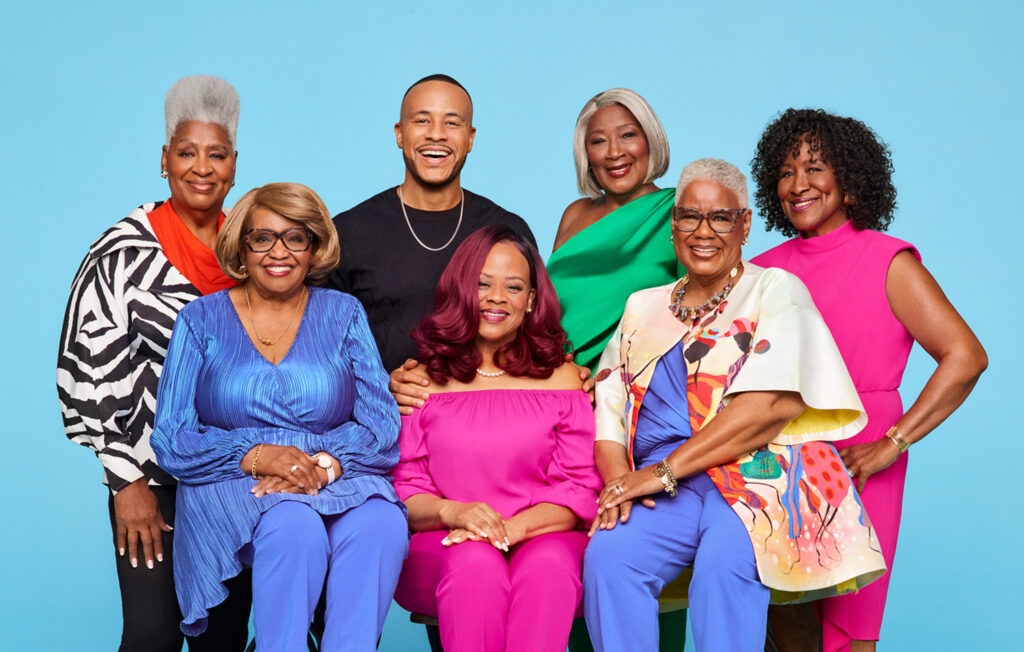 DeVon Franklin, His Mom & Aunts Share Why “It Takes A Woman”

There’s an African proverb that says “It takes a village to raise a child.” Hollywood producer and bestselling author DeVon…

. The Christmas Chronicles 2 streams on Netflix this week and we got a chance to sit down with Mr. and...

. "It's easier to draw a superhero, than to be one." -- George Buckman Just one of the many lines...