Originating in Northern Ireland, Rend Collective Experiment is more than a band. It was started by a group of college kids as a movement in an attempt to reinvent worship and create a shift in culture where people felt they could belong and be a part of something bigger than themselves. Now on their first tour in the United States, that same theme is still at their core and reflected in many songs on their latest album, “Homemade Worship by Handmade People.” Risen talked with Gareth Gilkeson and Chris Llewellyn about everything from Irish Monikers and Saints, to communicating with God and ongoing spiritual revelations.

Risen Magazine: When everyone is singing together in a concert setting, or even in the car for that matter, it seems relatively easy to worship, but how do you practically follow Christ and how would you encourage others to lead a life of faith?
Gareth Gilkeson: I think that really is the biggest fear in us, that people would come and have a one-night buzz. And the buzz stops when the music does. Our heart and what we’re trying to equip the church with, is to understand that worship is about building the kingdom. One of the songs we have “Build Your Kingdom Here” is a call to the church. It says, “We are the church, we are the hope on Earth, we are the hands and the feet.” What we’re trying to say is that worship is what you do; it’s not only what you sing. I don’t think we’ve written any songs that are trite or just that “Jesus you are lovely” song. Because first of all we’re guys, and we don’t even say anybody is lovely, and second of all that’s not what our heart is, our heart is to try and equip the church. We’re frustrated as well because we do a lot of touring and we don’t get as many opportunities to be able to worship like that as much as we want. So we write out of a place of frustration and a dream that God has put in us because that is what we grew from. We grew from a college movement which Glenn [his buddy sitting next to him on the tour bus showing support for that night’s concert] and I started 10 years ago. That’s where we came from. We were representing the kingdom on the ground and that’s what we believe is real worship. 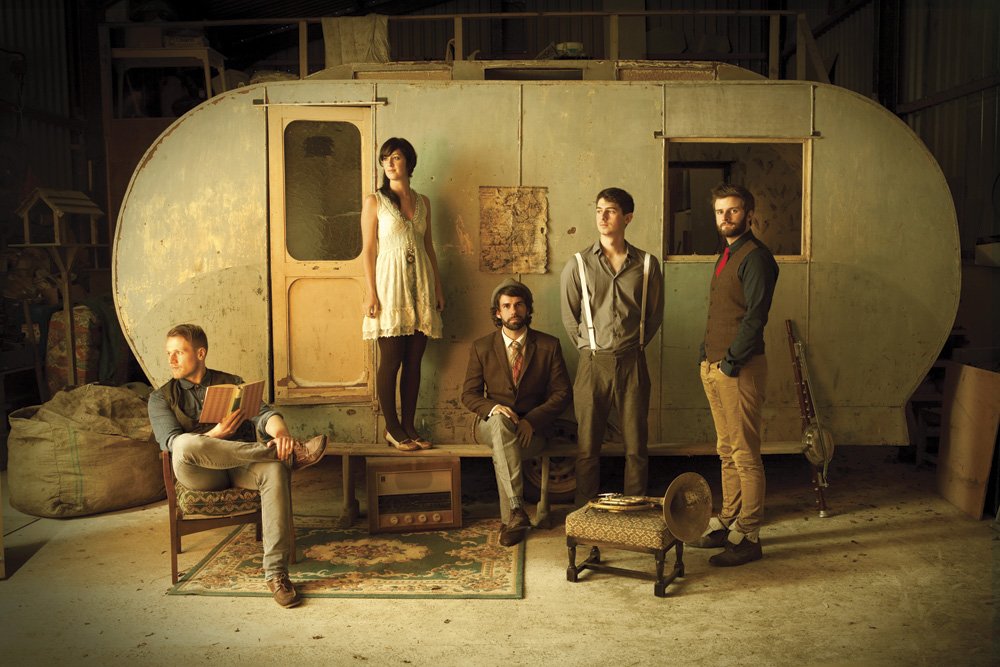 Risen Magazine: Worship is a form of communication with God, and one I think many understand, but when it comes to listening to the Lord and hearing his direction for your life or music, how do you navigate that?
Chris Llewellyn: I wish I had a really amazing answer to that where my life was full of this true clarity of God’s voice. I guess we’re part of the struggling people in that way. I mean the best you can do is set aside the time, read as much as you can, and pray for God’s grace that he’ll speak to us. There are no formulas to it.
Risen Magazine: Where does the inspiration come from for your lyrics?
Chris Llewellyn: It comes from our individual walk with God, and we all read quite widely as far as theology and even poetry. And even just the discussions out of community, you can hear God’s voice in the conversation that goes on between a community of people that are trying to follow Jesus. A lot of times that really forms the place that we write out of.

Gareth Gilkeson: It’s a lot like this Saint, called St. Brandon, around the same time as St. Patrick… so he felt God call him to go out and explore, so he left Ireland on a boat with quite a few other monks and they had no idea what they were doing. That is something we feel which is why our last name is “Experiment“; to make it very clear that we are not a clear cut, evangelically rounded, perfect, know-exactly-where-we’re-going bunch of people, because we’re not. We don’t have all the boxes checked and we don’t know exactly what God has called us to, but we have the blueprints and the seeds and everything that he has planted within us. That’s what we’re following…those dreams and those whispers. I love the idea stepping out of Ireland knowing that Jesus is leading and he’s the captain of our ship.
Chris Llewellyn: It’s funny you didn’t finish the story about St. Brandon there because actually he landed on an island and then in fact discovered the island was a sea monster, so some of it you might want to take that with a pint of salt. We think he left Ireland. Sometimes Irish people are good at telling a good story so it’s hard to know. That story didn’t make it into the scriptures [laughter]. I haven’t read it.

We were representing the kingdom on the ground and that’s what we believe is real worship.

Risen Magazine: Ireland is known as the “land of saints and scholars” – how does this moniker effect your approach to music?
Gareth Gilkeson: Oh yes, we’re very holy, and very smart. [Laughter] That’s where that moniker comes into play.
Chris Llewellyn: You don’t notice it being in Ireland, but I guess you’re always affected by the culture you grew up in. There are monasteries, and ruins of monasteries all over Ireland and the stories of the saints are worked into everything you learn in primary school. So our approach to spirituality has been affected that way. We have a song on the album, “You Are My Vision,” which is a song that St. Patrick wrote. We probably wouldn’t have re-translated it if we hadn’t grown up in that culture.
Risen Magazine: You mentioned the Experiment part of your name, but the word Collective is really an important part of your band’s identity too. I think so many people are longing to feel a part of something bigger than themselves, a sense of belonging. You even say, “Welcome to the family” on your website, so what advice can you give to people who want to be connected?
Gareth Gilkeson: I think the Bible is so much about the outsider, and I think that’s one thing people and churches need to remember, the outsider is actually deemed in the scriptures as somebody who remembered where to seek, and to evolve. So for churches, people, and youth groups, we all know what it’s like to grow up with a bunch of people who you are like and that sort of thing, so I guess the collective thing for us has major benefits, but also major drawbacks. We have a lot of relational things that we always need to keep in check. Nothing is ever simple with a group of people, because there are people with a lot of needs. But we deem that more important than anything else. With the aspect of “Collective” we want people to feel like they don’t have to be a musician to be part of this and we’re not too cool for school. We have a lot of people that are involved in what we do that aren’t musicians.

Risen Magazine: Since you write all your own music… what struggles or celebrations are you finding the most universal to young adults from country to country?
Gareth Gilkeson: One of the things we’re seeing is church people really struggle with guilt and really struggle with their issue. There’s a song called “Second Chance” and we thought we needed to deal with that issue. Guilt really chains people up and makes them ineffective. Instead of people thinking about, How can I share the gospel, How can I love people more, they are busy thinking about their guilt and what they’ve done wrong and how they are powerless because they’ve made mistakes. So we wrote that song about second chances given at the cross because it’s just time to move on from failure because that’s obvious. That was a big thing we felt in the temperature of the church especially people in their late teens, twenties and thirties. Why waste a life struggling with guilt, when you could be using it for the gospel, and using it for greater things.

Risen Magazine: I think a lot of people can know that they are saved, know that they are a Christian, but to know, that you know, that you know that he is God, he is Father… was there a defining experience for you or when did it sink in and you believed it, rather than just talking or singing about it?
Gareth Gilkeson: I think for me, there is ongoing revelation. There are times whenever God meets you exactly where you’re at, and he communicates exactly who he is for you at that moment. I can remember one time running through a field crying, and laughing, and jumping like Little House on the Prairie, just really weird and I just had this revelation that God was my friend. There are times you realize who God is and then a lot of the times, like me right now, I’m waiting on a new revelation of who God is for me at this moment in time. It’s a new season for a new relationship. I guess it’s like when you were a kid, you spend time with your dad and he’s a disciplinarian, then you’re a teenager and you’re like “eh,” and then when you’re thirty and you’re building your house and he’s [your father] around, he’s a friend, and it becomes a whole new experience. I think our relationship with our Father in Heaven is that same sort of thing, where the definition of the relationship changes as you get older and God reveals different things. For me right now I’m hungry for a new revelation of who God is for me at this time.

At least we could all virtually be in the same room because the rivalry between these two girls is fierce!...

Standing Up and Giving Back: Pro Stand Up Paddleboarder Gillian Gibree Written by Mei Ling Starkey When Pro Stand Up...