Born in southern California and raised on the small island of Samoa, the Katinas aren’t your everyday worship band.  This award-winning group comprised of brothers, John (vocals), Jesse (vocals), Sam (keyboards), James (bass) and Joe (drums) blend a unique style of vocals and instruments that have resulted in popular worship songs recognized around the globe.  They’ve come a long way since singing at their father’s church as young boys.  But make no mistake, their closeness and family bond has played a huge role in their ability to stay together as a band for more than 20 years.  Risen sat down with the group to get an insight on what keeps them strong.

Risen Magazine: Was music a big part of your growing up experience? How did your love for it develop?
James Katina: Although we were born in southern California, [their father was stationed in the military at Camp Pendleton] our family moved to American Samoa [a small island 2,000 miles south of Hawaii] when we were young. Our dad was a musician and pastored a church…he conducted the choir and we were always around music which was a big part of the culture on the island. We didn’t have any formal instrument training then and just sort of picked it up. 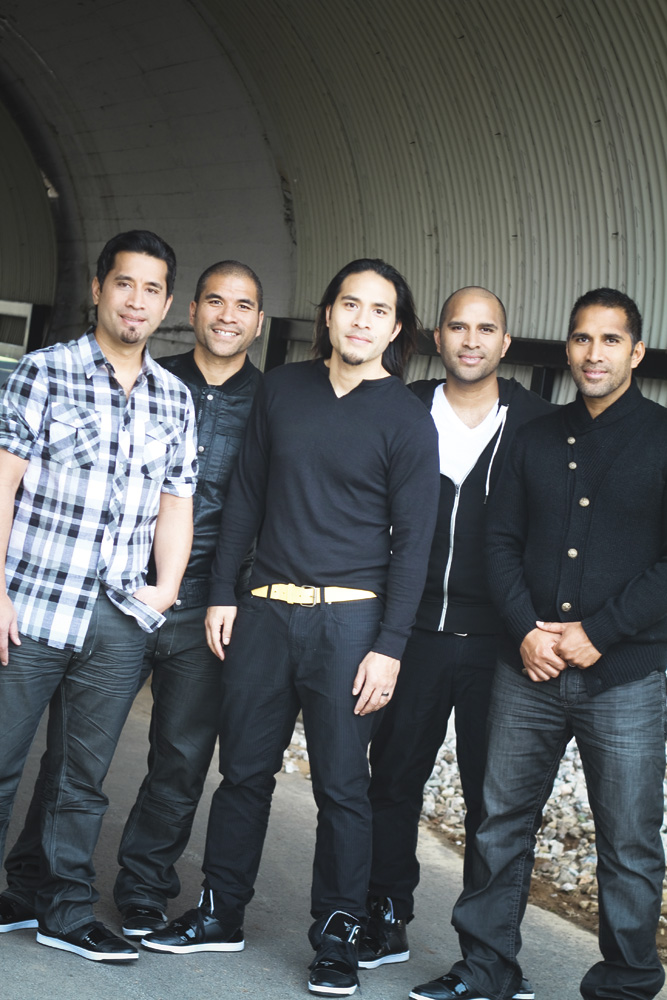 Risen Magazine: What sort of music influenced you as young boys?
John Katina: Well, there was only one top 40 radio station on the island and we listened to that. It played R&B, Motown, Rock and island music. I would have to say that our music is a fusion of it all. Our dad taught us to have a good ear for music and develop a strong hook. Any Christian music we heard was sent over to us from the States from our cousins. Most of our singing while on the island was at churches and fairs.

Risen Magazine: When did you start singing professionally?
Joe Katina: In 1987 we moved back to the states to be with our mother who had been diagnosed with cancer. (Their parents moved back a few years earlier to pastor a church in the state of Washington). At that time we would travel up and down the West coast primarily in California, singing in churches. We met BeBe and CeCe Winans. Bebe was a great help to us and we looked up to their family. He told us if we were really serious about our music, we should move to Nashville, so we did.

Risen Magazine: Before we get into just how your music career developed, can you share about your relationship with your mother?
Joe Katina: We were very close to her. She was the major influence on our faith and set such a solid foundation for us. She died about a year after we moved back to the states. Mom’s death hit us all very hard.

Risen Magazine: And one of your most popular songs is about her?
Joe Katina: Yes, we wrote the song as a tribute to her.
Risen Magazine: It’s pretty hard to listen to those lyrics and not be moved!
Mama, we were so sad when you left us
You know, things were so right,
And our future seemed bright
Then you were gone
Mama, you were gone
You were amazing,
You were so beautiful.
Tell me, why did it end this way?
But before you went on
With your last breath you said,
You said “We must go on
On ‘till Jesus comes.”
We’ll see you again,
Yes we’ll see you again, mom again

Risen Magazine: The faith that she instilled continues to carry-on in most of your music. When did your “break” into the professional industry come?
Joe Katina: Well, we were singing mostly in churches and were approached by Maranatha records. We signed our first contract with them.
Risen Magazine: That was pretty much in the 80s…is that when you were known as Katina Boyz?
[Laughter] Joe Katina: Yeah it was the era of the Boy Bands. Then through a course of events BeBe introduced us to Clive Davis who at the time was with Arista Records. That was in 1993 and we were very young. We were offered and signed with Clive — an 8-record, multi-million dollar contract. As we began working on the first album, we would do something and send it to him to listen to and he’d send it back with a different approach. We went back and forth, for a year, really trying to make it happen, but we just didn’t feel right about what was being asked of us. We assumed when we signed that we would be able to just keep making our music as we had been doing. The music-lyrics they wanted us to sing were just contrary to our beliefs. We felt so strongly about needing to stand on what we believed – plus if we had done those songs we would have had to answer to dad! [laughter].
We did a lot of praying and fasting through this time and by the grace of God we made the right choice to stand firm. To Clive’s credit, he released us from the contract. We never did end up doing one album with Arista.

Risen Magazine: Wow, that’s so rare in the music industry! It’s noticeable that worship time plays a big part in your concerts, why?
James Katina: When we started and still today, we do a lot of church venues and lead worship. It has become our own style. Worship is the heart of who we are and it is very natural to us.

Risen Magazine: What is your typical tour schedule during the year? Do you all hang out together [families] when you are not on the road?
Joe Katina: We travel about 110-120 days a year. Our heavy tour time is around Christmas but most of the other dates are Friday-Monday trips. They range from special ministry events, to conferences to concerts. We limit our days away from family. Between the five of us, we have 17 kids with ages ranging from 18 to 3 years old and one baby on the way. Jesse and his wife are expecting (so the Katina kids will soon expand) to number 18!
Our families are so important to us and we place a high priority on being with them. We do spend a lot of time together and the cousins are very close. The kids are around music a lot, it looks like some will probably follow into the path of music someday.

We assumed when we signed that we would be able to just keep making our music as we had been doing. The music-lyrics they wanted us to sing were just contrary to our beliefs.

Risen Magazine: You’ve had a number of albums and recording hits such as “Thank You” and “You Are God“; do you have a favorite?
Joe Katina: There are different things about each album. For me, I think a favorite is our self-titled album.
John Katina: Our latest album Collage features several guests including CeCe Winas who we sang with on her first solo tour. The process for doing collaboration was very special.

Risen Magazine: How does that writing process work for you? Do you say, “Ok, time for a new song,” and then just get together?
[Laughter] Joe Katina: That would be nice but in reality, when we know that we have an album coming up, we’ll spend time together. We all collaborate and sometimes bring in outside writers.
John Katina: For about three to four months we get together and hash out melodies and ideas. Sometimes it’s the music that comes first, sometime it’s the lyrics. But I’d say that 80 percent comes from those writing sessions. We’ve been blessed in our career to work with a variety of producers and arrangers who help with our creativity.

Risen Magazine: What advice would you give today to a young person or group trying to make it in the recording industry?
John Katina: In this age of the internet, stay true to who you are. If you have a great foundation in faith and a church body, stand firm [in what you will and will not do].
Joe Katina: This generation has so much talent. My advice is to work hard. I don’t mean to sound old or judgmental, but the younger generation is given so much and almost has a feeling of entitlement. Be willing to work hard.

Risen Magazine: Where do you hope to see the Katina’s in 10 years?
Joe Katina: Still loving each other! I hope we are able to encourage and provide opportunities for our kids and others by helping them with their aspirations in music. We had many people help along our journey, and we didn’t realize at the time how valuable those relationships and blessings were. The advice we got was to stay faithful, which instilled a confidence in us.
John Katina: Continuing with the awesomeness of family. We encourage others to share and invest in the institution of family … be loving and forgiving.

. Take a trip to the Italian Riviera this Friday when Pixar's LUCA streams on Disney+. We talked with the director Enrico...

Season of Prayer Guides Filmmaker Alex Kendrick to Tell the Story Written by Kelli Gillespie Many are cautioned about the...

. . Where do our personalities come from? The new Pixar-animated film SOUL takes a unique look at just that. We...