Combining influences of reggae, rap and hip-hop, Paul Wright uses his music to encourage and inspire people. His lyrics allow listeners to reflect on their lives but at the same time tell a story. Some are serious; some are light and fun, like Burrito Boy. But whatever the journey, this passionate songwriter sums it best when he says he “just wants to provide a soundtrack for your walk.”

Risen Magazine: What was your family like growing up? Were they musical? Where did your love of music come from?

Paul Wright: I have a really supportive family. My mom was a music teacher and my sister, who is about three-and-half years older than me, is a music teacher too, in Hawaii. She was more musical than me growing up. They would be playing piano and singing songs…I didn’t really like to sing. I was a little too shy to sing. I grew up in that kind of house, very supportive. My mom bought me my first keyboard and she also had guitars around the house. My father was a drama director, so I grew up watching his productions. I run ideas off of him. I was just working on the new bio for our band, and my dad totally helped me because he’s also an English teacher.

RM: Was there a specific point in your life where you decided you wanted to turn music into a career and realized it might be your calling?

PW: I think I really received the calling when I was 12. It was one of those times God became more evident. Music was instrumental for me in coming to understand God more. I think because I was inspired in that way I wanted to also inspire others. That was really the focus and drive when I first began in seventh grade. TobyMac and dcTalk were huge and actually there is a rap that Toby had… ‘R-A-P, talk is my tool, my gift to use, R-A-P to spread the news, that God may know your part, tell the world what’s on your heart.’ As a 12-year-old I took that literally. It was pretty cool when it came full circle for him [TobyMac] to get a vision for my tunes. It was one of those moments where you say, “Ok God I see how you’ve orchestrated this.” I think with every musician, when they are independent and on their own, they are looking for the opportunity to get their songs out there to a bigger audience.

RM: Did you grow up with faith? Was there a defining moment?

PW: My parents took me to church growing up, but it felt very traditional; I didn’t really feel connected. It became more personal when I was 12 through the crusade (Billy Graham) and through bands like dcTalk. I was kind of the prankster and I love pulling jokes and pranks, so there was that part of me that would still do that.

But as far as any changes in my character, my parents would say my anger… there were times I would get angry and frustrated playing cards, like Old Maid. I would have Old Maid and would be so mad I’d throw the table. I think that would be the biggest character change. I don’t know what’d you call that… but now I control anger better and don’t get mad at Old Maid [laughs].

RM: Your music has influences of reggae, rap and hip-hop. Where does your sound come from?

PW: I think my foundation when I first started writing was from a hip-hop producer perspective; like sequencing beats and instrumentals, then writing raps and hooks over it. I had friends in high school that were more in rock music and they taught me how to play guitar. In college everyone is playing guitar, so I played a lot in college.

Going to Hawaii opened my eyes to reggae music, and the island culture there, and the way they approach music. It’s very positive. The reason why I do music is to encourage and inspire people and that kind of music is a great soundtrack and backdrop to those lyrics and that message.

RM: If your focus is to encourage and inspire others, who or what encourages and inspires you?

PW: That’s a good question. It’s funny I was talking to my friend who’s a landscaper in Santa Cruz [California] and he was talking about the roots of a tree… I wish he were here to explain it [laughs]. There are these things that grow on the roots to help them absorb the nutrients from the soil like those people in my life that encourage me or inspire me and give me confidence and hope that I’m doing what I’m supposed to be doing. Traveling and meeting new people is very engaging and inspiring along with seeing new places, especially beautiful places like Hawaii and San Diego. Also I’m inspired by motivational speakers like Joel Osteen, sometimes I’ll listen to him, and he’s just so positive.

I love to hear where people are from and what they are doing and that’s how I approach music.

RM: In order to achieve goals, focus is required along with hard work. Who was the catalyst for your success?

PW: I have had this internal drive since I was 12. People have definitely encouraged it; they have encouraged it by giving me a platform for that gift. My youth pastor growing up was really encouraging too. The first time I ever played, I was 14 or 15 and did Awesome God with a buddy of mine. My buddy would beat-box and I would rap – kind of dcTalk style. Back then I had no idea how things worked in the industry, I was thinking helicopters and limos, but he was super encouraging and always let us play. I still go back and do a fundraiser every year for their Mexico trip. I’m just encouraged because I am doing it, it’s just not on the scale that I envisioned it, yet.

RM: Your music was featured in the soundtrack for the movie To Save a Life. How did that come about?

PW: It was really cool. The songs used were the ones I wrote while in San Diego. That PB song… I wrestled with it. Just like your magazine, the song isn’t necessarily Christian. That record was really kind of more of a narrative approach and a concept record as opposed to songs directed towards my faith, although there is faith in the story. The song PB talks about partying, and taking shots, and I don’t want that to be my banner or message, but it’s one of those things where you don’t want to be judged based on some lyrics in one song. Playing in a lot of churches growing up, you wonder, “How is that going to be interpreted?” And if younger people hear, then what is that going to do to them? It’s so cool because that song was used in the movie and I was just reminded that God is so much bigger than me. Why am I trying to control what is going to happen to this song? He’s going to work it out for the good. That brought a peace to me. God is bigger; it was a reminder that he was in control.

RM: How do you feel about Christian music as a whole versus mainstream music?

PW: I think as I progress in my songwriting and after playing so many shows, I’ve realized the need for conversation. I’m personally not the type of guy that would go up to a stranger and dive into faith matters; unless it was really on my heart. But I love just getting to know people and if it comes up, then that would be sweet. I love to hear where people are from and what they are doing and that’s how I approach music. I wouldn’t necessarily consider my music Christian, in the sense that I don’t really think music really is Christian, but there definitely is a need for worship music. I think that’s what Christian music is, worship music. You can sing about the light, or what you see in the light; and I’m an artist that likes to sing about what I see in the light, at the same time, singing about the light too.

RM: Explain how the band Rootdown came about?

PW: It started out as the backing-band for my solo stuff and it’s progressed into the four of us as a group. We play at churches, we do fundraisers for mission trips, and we play at breweries… we play everywhere. I think when we first started I was a little bit nervous because I had grown up playing on a Christian record label, so I played mostly at Christian music festivals. The last two years there has been so much growth in me as a songwriter and as a person.

RM: What would you say has been your career highlight up to this point?

PW: This new record… I’m excited because I think it’s a pretty accurate reflection of where we are as a band and our beliefs. We tested a lot of these songs out live and we played at over 50 colleges this past year. A lot of these songs were written live. In Huntington Beach we were playing at a pub on Main Street by the pier – and those aren’t my favorite gigs because they are so long – but they can be a lot of fun. We ran out of material so we just came up with a song on the fly. And we actually called it HB. It was the best song in the set. Improv is a big part of our band. I think the best is yet to come.

RM: With the best yet to come, what do you hope that future looks like?

PW: I hope that our music gets out to more people. I’ve been doing this for eight or nine years full time, being under the radar. I love it and it’s a blessing to do. But I feel like I’m a referee with a basketball at tip-off; at the beginning of a game and I want to take our music and put it up there and see where it can go. Especially with our live show too, it’s so exciting when people leave and they are happy, it’s so encouraging. Regardless of where people are in life I think they feel hope. I’d like to see that on a bigger scale and it could be cool to tour with bigger bands and have songs on the radio.

RM: What advice would you give to someone who wants to pursue their calling, but aren’t really sure about their skills or opportunities?

PW: If they know what they want to do, and it’s just a matter of having the confidence to go for it… then take baby steps. They are the only ones holding themselves back. Especially if they are creative in their calling, sometimes we are the most critical of ourselves. I would say surround yourself with people that are positive, but truthful. Someone mixed with Simon, Randy and Paula [American Idol Judges], all in one person [laughs]. 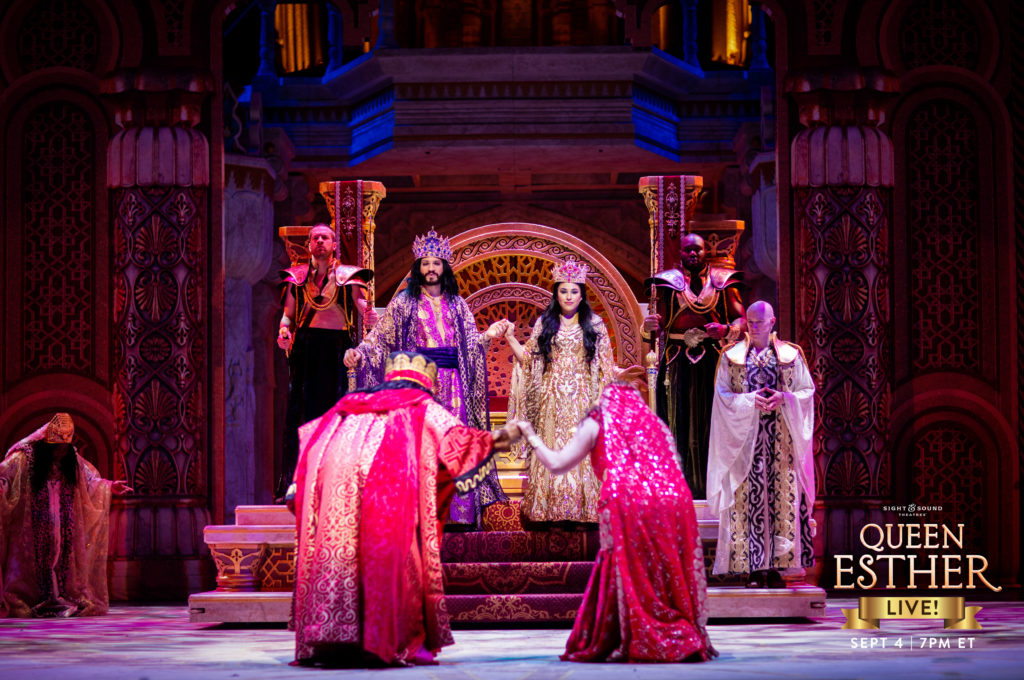 . After three years in development, the spectacular brand-new stage production QUEEN ESTHER was set to premiere in Lancaster, PA this past…