Founder and award-winning film director Phil Stevens will lead Missio Dei, which means the “Mission of God,” and develop, direct and distribute one to two original multicultural films a year.

Production of the first film begins this month on “The Send Off” and Risen sat down with Stevens to learn more about his calling to the industry.

Risen Magazine: You were able to create this production company, but that wasn’t what your first occupation, career-wise… share the lead up to that, what you were doing, and the calling you felt.

Phil Stevens: I actually used to be in IT for over a decade in process engineering, telling Fortune 500 companies how to do business better, really geeky stuff that I don’t like to talk about anymore because I love my job now, it’s so exciting. But I was called into the film ministry. I was in the actor’s team at a gigachurch. And I remember coming home and telling my wife, “I either want to make a video or be in a video, I’ve got to go chase this creative thing.” And she said, “Okay, but how are we going to pay for this big house, creative dude?” But God made a way. I landed, Home Depot as my first major client, Coca-Cola, Ford, and the career really just kind of took off for me.

RM: Talk to me about some of those conversations that you had with God when you were trying to decide, “Do I do this? Do I not do this? Am I supposed to?” Because I think that transcends for everyone regardless of what the shift or change is.

PS: A career change is scary, especially when you’re comfortable from a financial perspective in where you’re at, and to step out into deep waters and not know exactly what you’re doing. I remember the first couple things that I was making, they were horrible. The lighting was bad, the acting was bad, the writing was bad, but everybody loved it. We were making kind of like a Nickelodeon thing for the elementary ministry in our church and people just kept saying, “Make more stuff. Make more stuff.”

I think when you step out on the water like that, there’s always this big feeling of imposter syndrome. Like, “Why me? I’m not qualified. I’m definitely not equipped.” I remember seeking out a mentor and following him around like a puppy dog for a year until I got better technically and from a business perspective. So, I would just encourage anyone thinking of making the career switch, it’s not too late. I was in my mid 30s when I did this thing, moving into the film world and it was scary but you got to start somewhere, and happiness just came right along with it.

RM: Of all times, now the world is so ripe to be able to develop, or identify what your passion is, and then go for that and kind of create what that looks like. And you were fortunate enough to get a $25 million fund to come alongside when you created this production company. Talk to me about that.

PS: So I was working for a gigachurch and had my own company alongside of it where we were doing commercial work and I was making short films, feature films, talking head stuff, training videos for the church, and I remember thinking, “I just want to make narrative stuff.” And it was the top of last year when God got ahold of me in service and He was like, “I know I’ve been stirring in you to write and direct films only, it’s so much more than that. You’re going to be starting a faith-based film production company and it’s going to make a collection of TV and film projects that I’m going to fund it.”

And I remember shaking in my boots just wondering, “Hey, how am I going to fund this type of thing.” And He literally said, “I’m going to fund it.” And then a stranger came up to me, that always happens kind of in church because I’m the guy who puts the cool stuff on the screens. So I just assumed that I’ll be talking to people until my wife pulls me along and says, “It’s time to go. I’m hungry.” The stranger said, “Hey, I don’t know you. God’s been talking to me for two weeks to tell you that you’re going to be standing alongside of the Tyler Perrys of Atlanta and they’re going to wonder why you’re there. And God’s not going to wonder. Don’t be afraid, don’t be intimidated and you cannot fail in whatever God told you to do,” and this was the scary part. “Whatever God told you to do, you need to go do.” And this was 10 minutes after God had talked to me. I remember shaking, crying… a grown man crying, it was just ugly. It wasn’t pretty. Face all swollen, it was nasty.

RM: But you didn’t have to wait long for your confirmation, so that was good.

PS: No, I certainly didn’t. That’s why I was crying because God had never confirmed anything that quickly for me. And shortly after we met up with some investors and other options and probably early summer we got a commitment for over $25 million and climbing. And it’s more than I thought I could possibly raise. But the point is, I’m not the one raising it, it was a gift to me to do this work. And again, that imposter syndrome creeps in and I feel undeserving of it and I’m still trying to work through that, navigate through that and just do what God told me to do in obedience.

RM: There’s a need for solid content, for meaningful content that is important. So talk to me about what was placed on your heart before you started and then what you’re creating.

PS: Sure. I think what I noticed in working for a gigachurch that represents 142 nations, it’s amazing the diversity of this church has, is that there are people from all different cultures, ethnicities, different walks, different lifestyles that still need Jesus. We can’t just make this one-sided view of content specifically for ourselves. That’s all nice and good to make content that we want to see that inspires us, but we also absolutely have to reach the loss. Jesus said that, “I’ve come to heal the sick, not the healthy.” So when we make content, it needs to be relevant, it needs to feel like it’s based in a real, broken world, in a fallen world.

People need to see themselves in the content and be able to say, “That’s me. I feel that way. I feel discouraged,” or, “I feel that anxiety or that stress. I’ve got mother and father wounds or things that I’m dealing with that,” or, “I need peace.” If we don’t connect with the world in some way or fashion, tell them about Jesus, tell them that God still loves you, God still has grace, forgiveness for you, then what are we doing this for?

RM: Will the majority of the slate be stuff that you write and you direct, or where are you finding material or hoping to curate it from?

PS: Sure. I’ve got a few friends that are amazing writers and we’re kind of working together to create this slate of content. We’ve got two on the books, the first one I’ve written. And the second one, one of our investors had a story that they would like to tell that feels more like Sons of Anarchy. A little scared about that, but I think that’s going to be super exciting because bikers need Jesus too. When you say you have this type of money, and this type of access, and you’re making this content, people come out of the wood works with a story. Literally, everybody has a story. They want to tell the story about their grandmom or their neighbor’s, dog walker’s, best friend’s cousin who found Jesus, and that’s all good. But we need to make sure that these stories are top-notch. They need to have this story arc, these deep developed characters in order to reach people. So, we really have to be careful on what we take on.

RM: How can we see it? Are you thinking that these will all be theatrical releases? Are you going to work with streamings? Are you launching your own? What’s the way that we can then access your content?

PS: Sure. The hope is theater. You always want to get things to theater because you get more eyes on it. From a financial perspective, it just does better because then you pay for what you put into the film and additionally, you pay your investors back and you get to make more. But we’re already talking to studios who are like, “Well, we’ve read the concept of this, we want to see it before you go to theaters and make you a deal.” So this is just this new world with streaming platforms that Just 10 years ago when I was trying to do this and the doors were closing on me, now it’s a new world. Everybody wants content, especially if you have the money to make it, they’re just like, “Hey, come let’s see it and let’s see if it’s a fit for us.” 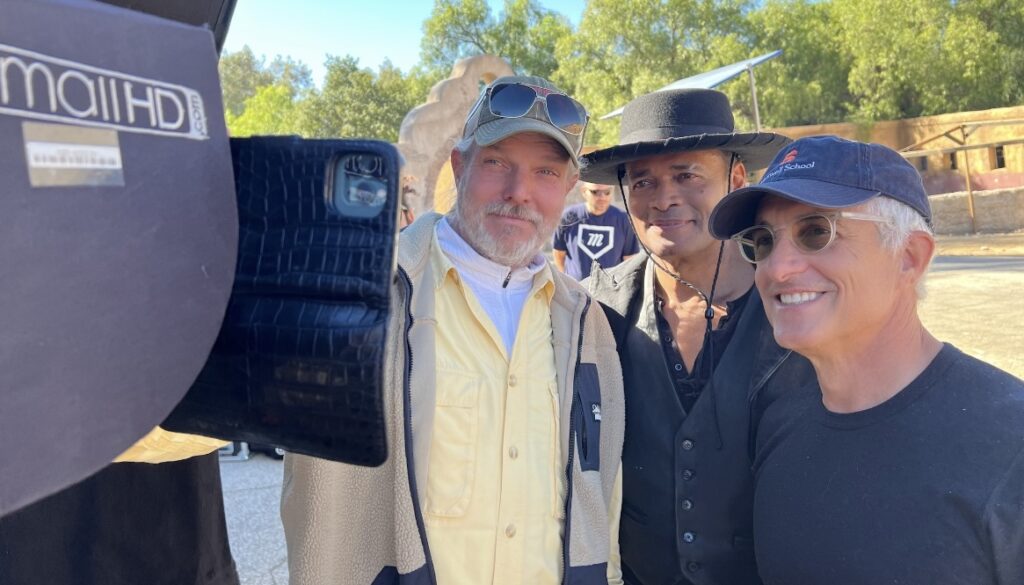 High Profile Production and the Opportunity to Invest in Western Through WeVidIt The western, Outlaws, just wrapped production and it…

From The Office to The Bernie Mac Show, Fresh Prince, and Black-ish.... Larry Wilmore has been able to write, produce...

Ella returns to school with a brand new perspective, excitement for what the future holds, and a major seize the...

Based on the bestselling graphic novel series of the same name by author Kim Dwinell, Surfside Girls is a live-action...