Stepping Into History One Role At A Time

Actor Joseph Fiennes is no stranger to history. One of his more iconic roles was Will Shakespeare in Shakespeare in Love, he was part of the British aristocracy in Elizabeth, he played theologian Martin Luther in Luther, and soon he can be seen as Olympian-turned-missionary Eric Liddell in The Last Race. So of course Fiennes would be interested when it came to telling one of the greatest history stories of all time: the resurrection of Jesus Christ. But this script doesn’t come straight from the Bible. It takes what Christians know to be true and tells it from the perspective of a Roman soldier ordered to investigate the disappearance of Jesus’s body from the tomb where he was buried, a crucial perspective Fiennes was eager to explore. The movie, like this magazine, is titled RISEN and while it is extremely entertaining, it is also theologically accurate. Fiennes who was raised in a Catholic home as the youngest of six siblings—many of which went into the arts including his brother Ralph who played Lord Voldemort in the Harry Potter franchise—talks with Risen about where his faith is now, his part in this epic biblical story, and his ongoing connection to period dramas.

Risen Magazine: From the intellectual to the emotional, there are many layers to the investigation in RISEN. When it comes to decision-making do you tend to be more fact or feeling?
Joseph Fiennes: You are right, there are many layers to this movie and I think that was the big attraction. There are many layers in our lives too. What I loved was the component of the gladiator action-ticking, clock-thriller-detective story, and a theological debate that surrounds it. I think for many of us, if not the majority of us, we are always in dialogue, a self-dialogue, or a dialogue amongst others, on the subject of spirituality, Christianity, religion; so the events that occurred all those years ago are very prevalent in our lives today and that is something that I personally connected with and I think audiences will too. 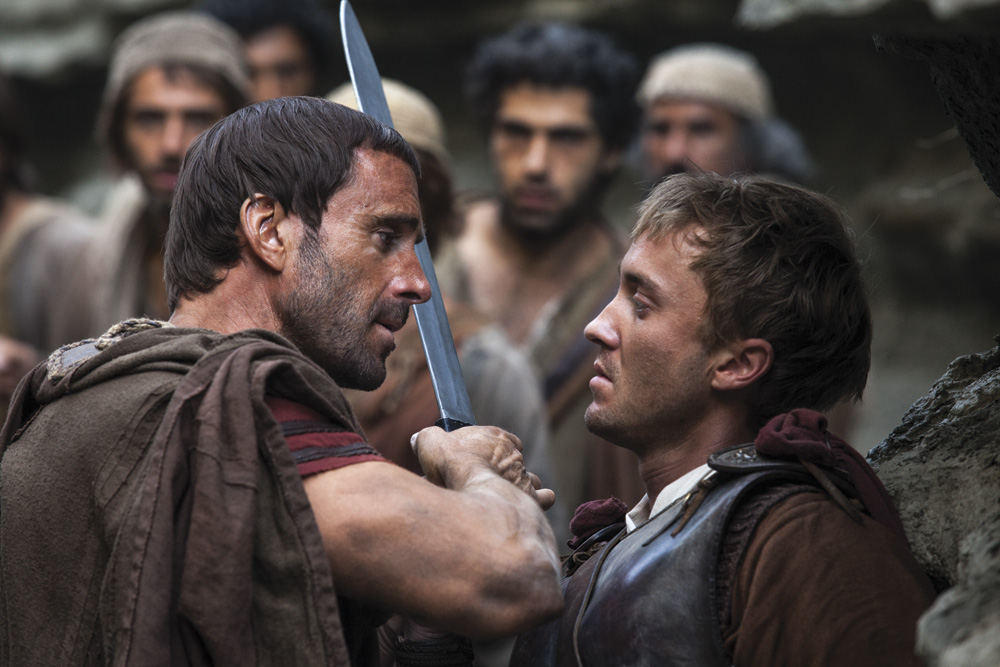 Risen Magazine: I read that you were raised in a Catholic home, so stepping into this time period and researching this Roman tribune in this epic situation, how did it effect your personal faith?
Joseph Fiennes: I’m a bit of a lapsed Catholic if I’m honest, but I was certainly brought up in a Catholic family and I was very interested, as I think many children are, about the story of Christ. It’s extraordinary and hit a big deep part of my psyche. So it was wonderful to have the opportunity to be involved with material of this kind. I get to revisit the dialogue that was a big part of my childhood.

Risen Magazine: Clavius is taking in a lot during the investigation. When have you had a shift in perception where you had to recalibrate your thinking?
Joseph Fiennes: It’s all about adaptation isn’t it? A part of our evolution is based on adaptation, recalibration and absorbing things that might be difficult circumstances or point of view. That’s part of the joy of being human; painful joy maybe.
For my character Clavius, [as a military tribune] there is a Roman belief system based on many gods. To jump from such an indoctrination to then be changed in such a short time frame, it can’t be more than a week from end to end, I think watching the distillation of the unfolding events is more powerful than the actual point at which Clavius changed. I think the change will continue for all the years to come. What he witnesses has such gravitas that it’s not something where the next morning he is converted and that is it. I think he will live with the shock and the ramifications of something that defied all his previous conditioning; that will take a lifetime to digest.
So I think what viewers will get out of this if they carry the concept through the film is that here is a man that is deeply conditioned in one philosophy and way of thinking, he’s a war machine and suddenly he is confronted through his interrogation, and this investigation he’s confronted with a whole new profound set of philosophies and we, as an audience, get to witness that recalibration of filtering that big change and that adaptation.

What I loved was the component of the gladiator action-ticking, clock-thriller-detective story, and a theological debate that surrounds it.

Risen Magazine: In becoming this Roman soldier, what was one of the more challenging aspects to playing Clavius?
Joseph Fiennes: The sandals. How do you take over half the world in sandals? [Laughter] It seemed my scenes where always full body so I could never wear any sneakers.

Risen Magazine: Ambition was talked about as a motivating factor for Clavius. As the youngest of six siblings, all of which are quite accomplished in the arts, how did that influence your decision to go into the same field?
Joseph Fiennes: We were very much encouraged by what we felt passionately connected to, whether it was a doctor or an actor, they had equal validity. Going back to the film in the Roman ethic, ambition was nothing to be embarrassed about. In fact it was celebrated to be ambitious. It was a big part of the Roman psyche and we see that in Clavius, Lucius, and we see that in Pontious Pilate as well; that it is all about moving through the ranks. Clavius is in a very powerful position as a military tribune, but the big dream for Clavius is to retire. To survive the Roman army is an incredible feat. So he is looking for peace, but he’s not looking for the kind of peace that comes knocking on his door. He is kind of prepped, but this awesome event [the resurrection] that takes place is completely unexpected. I don’t think he is ready for a change, but he is ready to get out [of the military]. 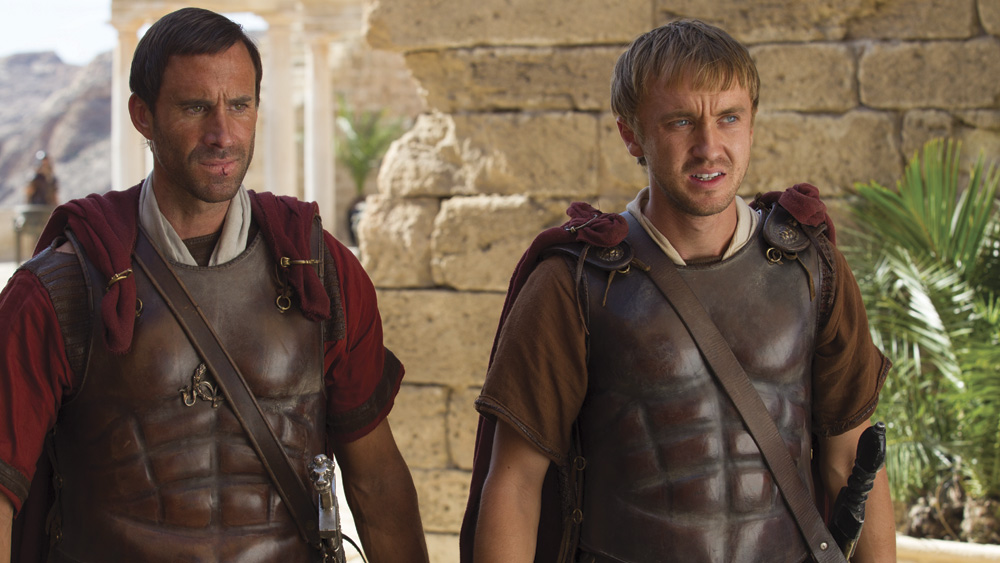 Risen Magazine: What encouragement would you give to others about embracing their passions and going after their dreams?
Joseph Fiennes: I say keep dreaming. Daydream, dream at night, just keep dreaming. I think if you feel passionately connected there should be no holding you back. I think there is a big difference between someone who wants to do something and someone who has to do something. I think you need to ask yourself, “Is this something I want to do?” Because there are lots of people that want to do things, but there is a difference from someone that has to do it. So I think it’s discovering, “Is this something I have to do.” And if it is, then go for it.

Risen Magazine: Following that train of thought, when it comes to picking projects do you involve yourself in films you have to be a part of, or do you select movies to try something different?
Joseph Fiennes: Sometimes picking a role is conscious, and other times it is not conscious. As I get older I feel like the material has to speak to me. It’s less about the ego and more about feeling really connected to the material. If it comes to me and I feel I can learn something from it, if I can rise to a challenge, or it challenges my preconceived notions, then it becomes attractive to me.

Risen Magazine: From Elizabeth and Shakespeare in Love, to Luther and Camelot, you have a gift for period dramas. What do you enjoy most about entering these different eras?
Joseph Fiennes: It’s funny, I’m just stuck in a period cinematic parallel world [laughter]. I look at those films like Elizabeth and Shakespeare in Love and I think, “Why are they so prevalent? Why are they so classic? Why do they survive?” They are deeply modern and deal with the human condition. They are more modern than some modern-day films that become extremely dated very quickly. So I guess I feel like over and above the time period in which they are set, I feel it connects to the drama of humans, which will always remain timeless.

I was very interested, as I think many children are, about the story of Christ. It’s extraordinary and hit a big deep part of my psyche. So it was wonderful to have the opportunity to be involved with material of this kind.

Risen Magazine: You just wrapped The Last Race where you play Olympian Eric Liddell.What was it like stepping into this gold medalist’s shoes?
Joseph Fiennes: It’s a fascinating story that took a lot of blood, sweat and tears. Making it in China under a communistic government adds another dimension to it, especially if the content of your movie is Christian. So this is an extraordinary cinematic event to make a Christian movie in China, and it’s a Chinese production. I am very excited about that. The movie surrounds the saintly, and very humble, Olympian Eric Liddell who won the gold medal in the 400 meters and turned down the opportunity to run what might have been his strongest race, the 100 meters, because the heat was held on Sunday [Christian Sabbath] and it went against his beliefs. He was a modern, disciplined Christian who came from a missionary background who was born in China and dies in a concentration camp in China. Needless to say the second part of his life he dedicated to the missionary cause.

Risen Magazine: Do any of your characters live with you beyond the project?
Joseph Fiennes: I wish. It’s just not the case. But it’s lovely when I get reminded. I don’t ponder. However, when someone tells me they loved or hated, a character, then I kind of go back and revisit it. I’m just so in the present that I keep forgetting the past.

Mel Gibson Tackles the Task to Tell the Stirring Story of An Unlikely Hero War stories aren’t new to the...

. Dolly Parton delivers 14 new songs in Dolly Parton's Christmas on the Square and she also stars as an...